Recently I’ve had two Northland writers approach me to report their negative experiences having spent thousands of dollars to get fiction books published without the critical response, sales or satisfaction they had expected. You’ll come across these publishing deals sometimes described as ‘hybrid’ publishing, referring to costs landing between author and publisher.

The Book Launch With No Books 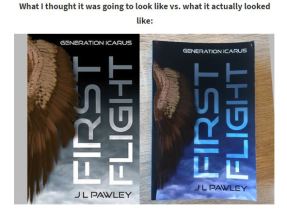 Whangaparaoa author J L Pawley, who would go on to find a lucrative, traditional and respectful publishing deal with Eunoia Publishing Group in 2015,  endured ups and downs with a publisher who took a lot of money from Jess then provided books of low quality. There was even a book launch without books available – a harrowing experience Jess details in ‘Learning To Fly,’ which is free to read on Wattpad (picture taken from JL Pawley’s Wattpad page; credit J L Pawley).

Mangawhai author Bevan Lawrence has repeatedly spent money with Indiana-based publisher Xlibris. Xlibris – usually the first Google result in any search for publishing options – charges authors a minimum of $US899; other options include the Professional publishing package, the Custom, Premium, Executive package and so forth, leading up to the $US16,000 Platinum package.

“I had always wanted to write and over many years have done so, but nothing I wrote seemed to me to be good enough,” Bevan said. “Finally I had the idea of joining several characters’ true stories into one; I just named the characters with the same name. So that book became Historical Fiction. Unfortunately my manuscripts were rejected by even boutique publishers, which I had approached because the mainline people just don’t even bother with unknown authors.”

“So it came down to self publishing companies. I made the mistake of being taken in by, I guess, my own vanity, hence the title of ‘vanity publishers’ who play on this human factor to get you on their hook. The company known as Xlibris published my first book. For about $800 dollars I got loads of publicity material: posters, book marks, business cards, an ISBN number, a listing on Kindle, a quick find app for the book and the book itself. One copy! A paperback, glossy cover, and well printed containing my illustrations. However despite the con of the first book I got two more published at a discount. The third one had some controversial information, so to avoid long possible legal complications I decided to publish under a nom-de-plume, you can’t sue a fictitious person. This has since caused a problem because subsequent novels are now printed under the nom-de-plume. I since discovered one could put their novels onto the web for free, and one can market them or should I say promote them online. My wife was infuriated by the frequent phone calls from my so called ‘representatives’ at Xlibris, wanting me to fork out yet more money to further ‘promote’ my work. My e-mail page filled with messages. No sooner was I getting somewhere with one representative, than they would be replaced with another. In fact all that a person may pay for at Xlibris, can be easily done by oneself. It has taken a long time and many hung-up phone calls to get Xlibris off my back. My advice is to stay away from vanity publishers.”

Lisa Spicer, Northland writer, had the following experience with one of the publishers discussed in this NZ Listener article, ‘The Paper Chase,’ written by Felicity Monk.

“The day came when I had finished my 35000 word manuscript, I excitedly posted numerous copies off to appropriate publishers around New Zealand,” Lisa says. “There was no doubt in my mind that one of them was bound to say yes.  Weeks passed and eventually the rejection letters began to arrive in the mail.  Yes, this was back in the day when a) you could submit directly to a publisher without an agent, and b) a publisher did actually respond to your submission.

“It didn’t take long to exhaust all my publishing options in New Zealand.  On doing some research I decided my next best move would be to have my manuscript assessed.  Of course this was going to cost money, which I duly paid and employed the services of someone whom I felt had the appropriate credentials.  This I did not regret, I was given some good advice and told to increase my word count to at least 50,000 words for the type of novel I had written.  Once I had done this I could then pay more money and this person would then pursue a publisher on my behalf.

“I went back to work, improved my manuscript and resubmitted to the assessor and paid my money.  This is now where things get a little dubious.  Within three weeks I get a letter back from a publisher, offering to publish my book at a cost.  Quite an extensive cost I might add.  At that point in time I had never heard of the term ‘Vanity Publishing’, I really had no idea what I was getting myself into.  I had the contract checked by a lawyer, and although he commented that the percentage of return wasn’t particularly fair considering my investment, I decided that it was worth the risk to just get my work out there.

“The day came when my parcel arrived, my first book all shiny and new.  I was excited and expectant that this was my big break.  There was celebration and then back to work.  I focused on my next novel, should a publisher come calling I wanted to be ready.  Six months later I received a rude awakening.  A statement of six monthly sales arrived with a cheque.  The sales weren’t great, but that wasn’t the shock.  Only 750 books had been printed.  It never occurred to me to ask how many books I was getting for my money.  It was clear to me now there was never any hope of getting an appropriate return on my investment.

Another six months rolled around, sales were even less than the previous.  My publisher said he was hoping to expand into Amazon, who were new to the scene at that time.  He also mentioned extending sales to Australia.  He talked a lot, he was going to do this and that. I nicknamed him ‘The Gonna Bird’ after a children’s book I had read.  Lots of promises but nothing happened.  I realised then he didn’t need to work for his money by getting my book sold, he had already been paid.

During this time I had someone hand me an article on vanity publishing, along with the comment, “This is who you used isn’t it?”  The article was fairly derogatory to those who attempted to cheat the publishing process.  It also explained something else to me that I had been unaware of.  In New Zealand we have two main bookshop owners, Paper Plus and Whitcoulls.  They purchase the majority of their books through a Company approved bookseller.   What is a bookseller?  They are the middleman between your Publisher and the Book shops.  They are going to push the books from their major suppliers aka major publishing houses.  Simply put small publishing houses don’t have the clout and have to work harder to get their books on shelves.  Although I do believe that since that time, our bookshops are required to buy a percentage of New Zealand based literature.

“I did complete my next novel, the second in a series from my first.  I did try to get that published, but to no avail.  I do wonder if having the first book published under the cloak of Vanity Publishing, tainted it. What did I learn?  They pay you, you don’t pay them.  It is something I have read many times since then.  I also suspect that the manuscript assessor I engaged only sent my novel to the one publisher.  I have no proof of this, but considering the response time of three weeks, I think we can safely assume that.  I also wasn’t prepared for the sense of shame I felt, when I realised that some people thought I had cheated the process.

“These days I prefer to do my own thing.  I am far less trusting now, even cynical.  The few publishers that will accept your work without an agent is growing less by the day.  Questions like “Do you know anyone famous or a celebrity who could promote your work?” really grate on me.  It’s all about the money.  Access to the literary world is changing, and despite my years of life experience, I am learning to change with it.  I recently self-published my first e book, and it didn’t cost me a cent.”

And now, a quick guide to the (very limited) fiction publishing options in NZ.

You can find a more comprehensive list of publishers at https://authors.org.nz/publishers/.

One thought on “Should I Have To Pay To Get Published?”